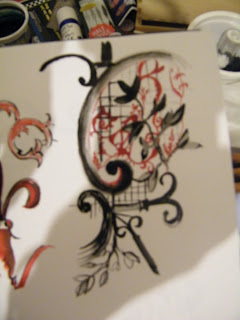 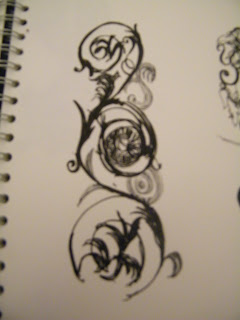 As promised I did some embroidery. I know its only small but once I have phoocopied it, cut it out and then placed into onto fabric it will be something else. But this will take a while. 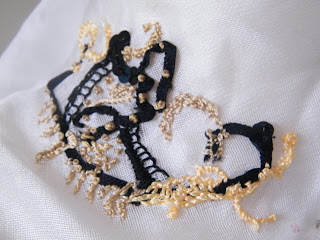 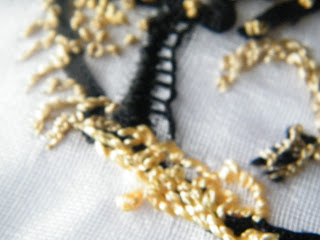 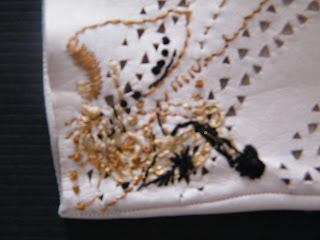 Posted by Unknown at 10:30 No comments: Links to this post

Im on the ARTS Thread blog !

First of all I'm so surprised they put me on there after I scared the journalist half to death. I was so emotionally overcome when I heard someone with a camera at ND ask for me, I jumped into the air and asked if I could hug the girl standing infront of me . The look on her  face quietly screamed 'mad woman' but  I am emotional and it had been a long, long, long week, with little - no interest in my work. ( I need to just reign myself a little, not everyone can handle me, I am overpowering at times). If your not interested in embroidery you too would walk right past it. It looks nothing from a distance, its all in the close up. I guess this is a major learning curve for me. My work needs to attract atention from a distance, it needs to draw the viewer in otherwise it will be overlooked.
Anyway here's a link to my blog interview. http://blog.artsthread.com/?s=Pauline+Easby
Excuse the photo, Im not a pretty sight in reality but photographs make me look even worse.
Posted by Unknown at 12:20 1 comment: Links to this post

never got through to Hand and Lock

OH disappointment. Its just not my year. Anyway will try again this year as soon as the brief comes out. At least I can structure my work around the brief rather than trying to structure their brief around mine. God what did I expect, really?
Posted by Unknown at 11:39 No comments: Links to this post

Yesterday after walking home from the shop I began a little rant in my head regarding  where I want to be in life and how much it had changed since I began my six year degreeathon. I had forgotten all about how initially I had only wanted to learn how to relax, no expectation of changing careers etc, but I got so involved in the creative process I just fell in love with each module, continually pushing my ideas and creativity mentally and physically. Then I got an internship in Copenhagen which resulted in freelance work, (which I have now returned to after the hectic final year) and thought this was as good as it gets for me. Then my minor project, Indigo and interest from an exclusive boutique began to raise my hopes. I began to think on a completely different level, maybe I could make it as a top designer, and get paid for the time I actually put into my designs. But alas this fell through and lets just say rocked my confidence, and made me devalue my First class honours, making me question where I wanted to be and what I wanted from life. After talking to Ingrid I began to realise where I want to be, I want to be with a company that likes me for who I am, someone who accepts my emotional overwhelmingness. Hey I'm passionate about life and everything in it . So this is a big shout out for  family, friends, lecturers and Fusion for believing in me. I'm finally coming to terms with the fact that just because you want something for a year doesnt mean you deserve it. I guess you have to want it from being a babes in arms.
Posted by Unknown at 11:38 3 comments: Links to this post

Ok, finally got my fears of my chest now its time to work. So as promised I began a few sketches, not yet with a needle but as Im not working at the minute I will try to get on with these. (health reasons and  the freelance work I had expected to be carrying out fell through, unfortunately). But I will be back on track soon, I dont stay down too long. Anyway started with a few blind mark makings, looking at my photos of Paris rather than looking at what I was drawing. I think some of them have potential .
﻿
﻿
﻿
﻿

Posted by Unknown at 12:18 4 comments: Links to this post

where's my head at?

I can't believe its been a week since I returned home from New Designers. I remember going there  six years ago when I first began my Part time marathon degree and leaving  with both a headache and heartache at the awe inspiring work and creativity within the building. I aspired to be like these students and hoped beyond belief that in six years time I too would be there at New Designers with my fellow students. AND I got there AND it was as daunting as it was the first time Only now I had nothing to aspire to, I couldnt re-do another six years, I was no longer an eternal student, I had made it to ND which in theory meant I was in the real world, which leaves me with a bit of a dilema. WHAT DO I DO NOW? Every time I went to ND I would walk away thinking how can I compete against the new emerging talent and competition year in year out,  but this time it was all the more real because I was up against them for real. How did it make me feel? invisible, unworthy, uncreative but also imensley sad as this was the finale to my passionate dreams. I would no longer be going to college, talking with my mates and lecturers and feeling part of something exciting or discussing how our ideas where developing or not. For me it was the end of an era, but I'm hoping its the start of a new one.
Posted by Unknown at 12:01 No comments: Links to this post